Courier (signature reqd)
$6.00
Courier (rural delivery)
$9.00
Post
$2.00
Please note: not all delivery or payment options may be available at checkout due to compatibility with other events that may be in your cart. 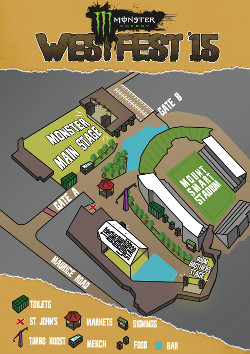 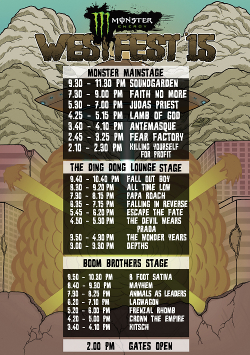 iTICKET Allocation Exhausted
All tickets purchased from iTICKET will be valid at the new venue.
If you have chosen to receive your tickets via courier, these will be with you early to mid February.

ODR Productions & The Rock proudly presents ‘Westfest ’15, an annual music festival that every rock fan will be sure not to miss! If the success of the inaugural WestFest is anything to go by, 2015’s event is going to be bigger and better, creating a must do, on all calendars. With more artists, more stages, and a brand new venue,’Westfest ’15’ is an unstoppable force.

With an entire second international line up to be announced!

Soundgarden, like the iconic rock bands who inspired them, redefined rock music for a whole generation and have had a revolutionary impact on the course of musical history.  Forming in 1984, their punk ethos, coupled with a metal sound, compelling lyrics and vocalist Chris Cornells ravenous roar, soon seduced audiences hungry for something new. 1991’s platinum album ‘Bad Motorfinger’ attracted worldwide acclaim. However, mainstream success came with the 1994 release of ‘Superunknown’ their popularity grew faster than anyone could have expected. After a dozen years, 5 pioneering albums, 10 grammy nominations and a slew of singles  including ‘Blackhole Sun’, Soundgarden disbanded in 1997 to follow personal musical projects.

Reforming in 2010, they announced a new beginning, paying homage to the mid 90’s.  Soundgarden celebrate their triumphant return to the live stage celebrating the bands legacy and introducing their greatest work to a new generation. With a perfect blend of vintage and modern, they are back and ready to blow their New Zealand fans away.

With their fusion of heavy metal, funk, hip hop and progressive rock, Faith No More have earned a substantial cult following worldwide. With many line up changes throughout their earlier years,  they found commercial success with new vocalist Mike Patton. Along with adding a new vocalist, the band had tightened it’s attack, and the result was the genre bending hit single ‘Epic’, which established them as a major hard rock act. Faith No More followed their break through success with 1992’s ‘Angel Dust’, one of the more complex and confounding records ever released by a major label, selling over 3 million copies worldwide.

After the supporting tour of Faith No More’s 1997 album ‘Album of the Year’ they announced that they would be disbanding. All remaining members went on to join other bands and create a different path for their retrospective musical talents. However in February 2009, after 11 years of dissolution, they decided to reform the band, and have officially embarked on a new path as the new and improved Faith No More; eager to show the WestFest stage just how groundbreaking they really are.

Judas Priest was one of the most influential heavy metal bands of the 70’s, spearheading the new wave of British Heavy Metal, late in the decade. Decked out in leather and chains the band has fused gothic doom, riffs, and speed; as well as adding a vicious two-lead guitar attack. 1978’s ‘Stained Class’ and 1979’s ‘Hell Bent for Leather’  established them as in international force in metal. The band's seventh album, 1980's ‘British Steel’, was its first U.S. Top 40 entry, and a heavy metal landmark, featuring songs, ”Living After Midnight" and "Breaking the Law”.Over the years Judas Priest became increasingly known for their extravagant live show, which featured Vocalist, Rob Halford, in his trademark S&M gear, thundering onstage. With the 40th anniversary of Judas Priest they released ‘Redeemer of Souls’ in July 2014, satisfying the ears of both old and new fans. Judas Priest were influential in the 70’s and are now incomparable.

Formed in 2003 in the suburbs of Baltimore, All Time Low, started out as a high school cover band before morphing into the energetic pop punk outfit that we are now accustomed with. 2012 saw the release of the huge album ‘Don’t Panic’ - which debuted in the top five on the NZ iTunes Album Chart securing them a sold-out show at the Powerstation in 2013, but they are back and ready to reinforce their loveable antics on their New Zealand fans with a few hints at new material too!

Santa Barbara’s pride and joy, Lagwagon have been belting ‘em out since 1988. Their catchy brand of punk is an infectious blend of pop and hardcore, lyrically tackling an array of personal political beliefs, and after a nine year lag, it’s time to get back on the wagon with the powerful and long-awaited album ‘Hang’ the boys are back on New Zealand soil, gearing up to show us their new material.

After unfortunately having to cancel their first appearance in New Zealand, The Wonder Years, couldn’t be happier to announce their relentless pop punk show is coming back to deliver on old promises, and what better way to do so than on the  WestFest stage. With four full length albums, two eps and countless alternative releases, they are no newbies on the scene, and are famous for putting on an energetic performance.

American based band, Crown the Empire, make music on a level rarely seen now a days, combining visual aesthetics, theatrical sonic textures and thought provoking lyrics for an audio experience that takes the listener on a wild ride of epic proportions, and Crown the Empire are ready to unleash this unique experience on the WestFest crowd.

More guests to be announced, international and local.

Check out the T-Shirt