Aroha17 From Slavery to Star Trek

As part of Aroha’17 & Auckland Fringe we will be hosting From Slavery To Star Trek - A Family’s Story by Andreea Kindryd; a favourite at Adelaide and Edinburgh Fringe Festivals, 2011.

Stories of her great, great grandmother and ending in the studio where Star Trek was created, Andreea Kindryd recounts true stories from her own life and the lives of her ancestors, creating a story that moves from politics in a family, to politics in a nation.

Her Grandmother’s Grandmother was a slave in Mississippi whose husband ran away to reunite with her when she was sold without him. Her mother was a hairdresser who thought Kindryd’s kinky hair was embarrassing and a rejection of her. The show also explores her relationships with history’s most influential civil rights activists from the controversial Malcolm X to the preacher of forgiveness Martin Luther King. The culmination is her behind the scenes view of the creation of Star Trek giving insight into inner politics and an unsung hero.

The stories may be set - but the style of telling is not... Each show is as different as the audience who come to watch. Through discussions and interactions with
our audience Kindryd  will tell her unique life story with charm, wit and integrity.

At 68, Andreea Kindryd started performing stand up before deciding storytelling was just the right fit for her. She is an award winning documentary filmmaker and has worked with the indigenous NAISDA Dance College and helped launch Australia’s Bangarra Dance Theatre. She honored her mentor Stella Cornelius by becoming a well-known conflict resolution and meditation trainer.

Part of the Mika Haka Foundation Aroha17 Festival of Ideas; #Aroha17 Festival of Ideas is a jam-packed, summer Film, Dance, Music and Gala week of events, from February 15 - 25 this year. From Academy Award Nominee Keisha Castle-Hughes to Klub Nights with NZ Hip Hop's Top 20; all live and online! Join NZ cabaret and comedy icons Mika and friends at an All Stars Gala, ending with world Contemporary Dance premieres and even a house party in Mt. Roskill - all created by The Mika Haka Foundation. www.mhf.co.nz 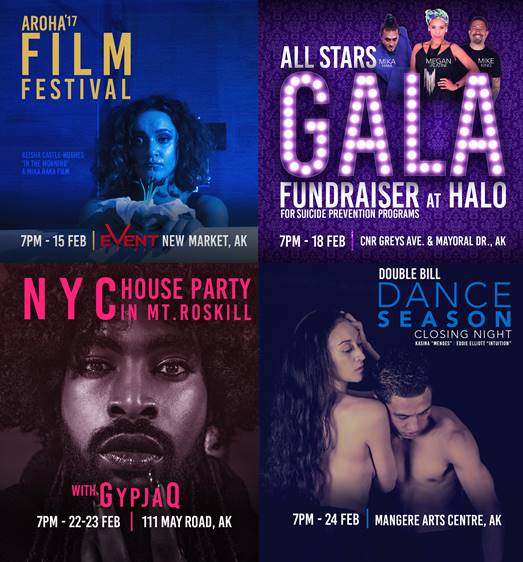 Purchase a FESTIVAL COMBO ticket to gain entry to all Aroha17 ticketed events!