The Sound of Music

Add tickets to your cart, enter your surname and membership code, click apply and receive one ticket for $0!

Select up to 10 tickets in one order, enter surname and membership code and click apply to receive 15% off

The hills are alive with THE SOUND OF MUSIC

One of the world's best-loved musicals, THE SOUND OF MUSIC, will be on stage in Whakatane this September.

This legendary Rodgers and Hammerstein musical features an unforgettable score that includes some of the most famous songs ever performed on the musical stage including “My Favorite Things”, “Edelweiss”, “Do-Re-Mi”, “Sixteen Going on Seventeen”, “The Lonely Goatherd”, “Climb Ev’ry Mountain”, and the title song “The Sound of Music”.

THE SOUND OF MUSIC tells the uplifting true story of Maria, the fun-loving governess who changes the lives of the widowed Captain von Trapp and his seven children by re-introducing them to music, culminating in the family’s escape across the mountains from Austria.

The musical originally premiered on Broadway in 1959 to record-breaking advance ticket sales, where it won eight Tony Awards - including “Best Musical”. The show opened in London in 1961 and became the longest-running American musical of its generation. The 1965 Hollywood film, which starred Julie Andrews and Christopher Plummer, won five Oscars, including “Best Picture”, and quickly became the highest-grossing film in history. Even today, THE SOUND OF MUSIC remains the most successful movie musical in history.

Since the turn of the 21st century, the enduring magic of THE SOUND OF MUSIC has led to major productions around the world, giving testament to its title as “The World’s Most Popular Musical”. 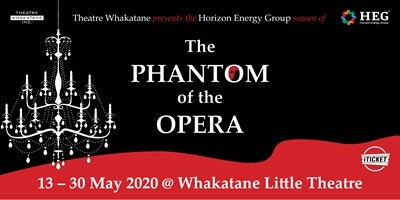 The Phantom of the Opera Little Theatre