This is Kiwiana at its best as those of us at a certain age will know. And just in time for Christmas.
Show; show and bar; meal, show and bar: you choose. Come alone, get a group together.

Murray Ball’s characters come to life in Theatre Hawkes Bay’s production of Footrot Flats written by Roger Hall. The music is written by Philip Norman with lyrics by A K Grant.

This production was first staged in 1983 predating the movie. It has aged superbly showcasing some of our heritage and humour. Reacquaint yourself with Wal and Cooch, Cheeky and Aunt Dolly, Prince Charles, the mischievous Pongo, bleating sheep, a reluctant ram, a cat called Horse and a pig dog called Major, an amorous sow and of course Dog and his paramour Jess.

Get your festive season off to a great start. 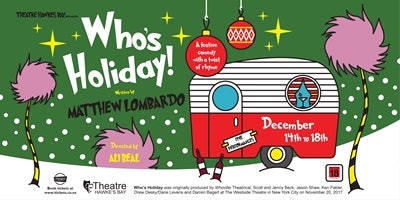 Who's Holiday The Playhouse